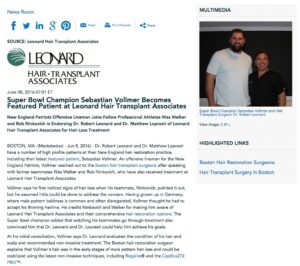 Vollmer says he first noticed signs of hair loss when his teammate, Ninkovich, pointed it out, but he assumed little could be done to address the concern. Having grown up in Germany, where male pattern baldness is common and often disregarded, Vollmer thought he had to accept his thinning hairline. He credits Ninkovich and Welker for making him aware of Leonard Hair Transplant Associates and their comprehensive hair restoration options. The Super Bowl champion added that watching his teammates go through treatment also convinced him that Dr. Leonard and Dr. Lopresti could help him achieve his goals.

At his initial consultation, Vollmer says Dr. Leonard evaluated the condition of his hair and scalp and recommended non-invasive treatment. The Boston hair restoration surgeon explains that Vollmer’s hair was in the early stages of male pattern hair loss and could be stabilized using the latest non-invasive techniques, including Rogaine® and the Capillus272 PRO™.

Designed to stop the progression of hair loss and to help regrow hair, the Capillus272 PRO™ laser device is a portable system that can be used from the comfort of home. Vollmer says the state-of-the-art equipment made hair loss treatment convenient and simple.

Vollmer reveals he had no hesitations about working with Dr. Leonard or about what to expect from treatment. He added that the team at Leonard Hair Transplant Associates was welcoming and forthcoming about the process. The New England Patriot hopes his story can influence other people bothered by hair loss and help them discover that there are effective minimally invasive and noninvasive approaches to treating this concern.

About Dr. Robert Leonard
Considered New England’s foremost authority on hair restoration, Dr. Robert Leonard is the founder and chief surgeon at Leonard Hair Transplant Associates. After receiving his undergraduate degree from the University of New Hampshire, he earned his medical degree from the University of New England. He then completed an internship in Florida, a surgical residency in Ohio, and a hair transplant surgery preceptorship in Michigan at the Chambers Hair Institute. Dr. Leonard is a Diplomate of the American Board of Hair Restoration Surgery and a Fellow of the American Academy of Cosmetic Surgery. He was also recently appointed to the American Society of Hair Restoration Surgery Advisory Council. Dr. Leonard is available for interview upon request.

About Dr. Matthew Lopresti
Dr. Matthew Lopresti works alongside Dr. Leonard at Leonard Hair Transplant Associates, located in the Boston, MA, Cranston, RI, Salem, NH, and New England area. A graduate of the University of New England College of Osteopathic Medicine, Dr. Lopresti has completed additional medical training at St. Joseph’s Medical Center in PA and Harvard Medical School, as well as a three-year residency at Boston Medical Center for Physical Medicine and Rehabilitation. Dr. Lopresti has spent the last year training under Dr. Leonard in the latest hair restoration techniques. He is available for interview upon request.