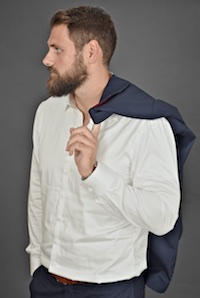 Born in Germany, former New England Patriots offensive lineman and Super Bowl Champion Sebastian Vollmer thought male hair loss was simply a part of life, and was unaware that there were treatment options available. But after speaking to teammate and Leonard Hair Transplant Associates spokesperson Rob Ninkovich, Sebastian decided to pay a visit to our hair loss doctor, Robert Leonard.

Vollmer became aware of Dr. Leonard’s work and reputation by speaking with Ninkovich and another former teammate and LHTA patient Wes Welker. At one point in his mid-twenties, Vollmer recalls having hair so thick that stylists would thin it out during hair appointments, but that changed over the last few years. Vollmer met Dr. Leonard and Dr. Matthew Lopresti at a charity event, and rather than wait until his hair aggressively began falling out, the world champion football player immediately scheduled an appointment.

“Rob (Ninkovich) pointed it out to me, and I really began to notice my hair thinning. I saw firsthand Dr. Leonard’s results with Rob and Wes, and knew that he was the right doctor for me,” Vollmer said.

The 31-year-old Vollmer was born and raised in Germany, where he says that, while there is no stigma associated with male hair loss, it’s looked upon as an inevitable conclusion. “Men in know they will most-likely lose their hair and that it’s a natural process, but they are less aware of treatment options, so I was happy to discover Dr. Leonard,” Vollmer said.

The Super Bowl champion first visited Leonard Hair Transplant Associates in April 2016. After a consultation and review of his problem areas, Dr. Leonard recommended non-surgical treatments to stabilize the progression of his hair loss.

“Sebastian has definite signs of male pattern hair loss, which is very common for men his age,” said Dr. Leonard. “He is a young guy, and still has a good head of hair, so the best course of treatment is to stop any further regression. Sebastian scheduled his treatment at the perfect time.”

Dr. Leonard offers a variety of non-surgical treatment options including: Rogaine® Foam, which stabilizes progression of hair loss throughout the top of the head and can re-grow hair.

The Capillus272 PRO™ laser device provides patients a portable, non-surgical option to strengthen their hair, to stop progression, and to promote regrowth from the comfort and privacy of home. It fits easily and discreetly into a baseball cap. The 272 lasers stimulate hair follicles to revive and to thicken thinning hair. When used for 30 minutes every other day, the Capillus272 PRO™ is one of the most effective low-level laser devices available in the world.

“It’s been very easy for me to follow Dr. Leonard’s instructions, especially with the Capillus272 PRO™ laser device,” Vollmer said. “I can wear it when I am around the house, or just watching TV.”

“When I first met Dr. Leonard, he was extremely welcoming, and up-front about the entire process. Seeing Rob and Wes go through it, I had no hesitations about what to expect,” Vollmer added.