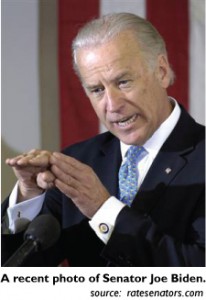 Since Senator Barack Obama announced his running mate, Senator Joe Biden, hair restoration surgery has been propelled to the forefront of American news. Biden infamously underwent hair “plug” surgery and was seen during the early stages of it on national television during the Anita Hill senate hearings. He is being scrutinized about his hair now that he is back in the spotlight.

I’ve observed the change in Biden’s hairline for years. During the 80s, his dark hair emphasized his large plugs, but now, with the whitening of his hair in combination with subsequent modern hair transplantation treatments, he has a slightly more natural look. However, the procedures he’s undergone are still evident to the naked eye.

After watching Biden speak at the Democratic National Convention last Wednesday night, I thought about how far we have come since the old transplant results. I hope, though, as I did back during the Anita Hill hearings many years ago, that the general public do NOT think Senator Biden’s results are what we do today. Today’s transplants are essentially undetectable–thank God!

In fact, today’s modern treatments could remedy Biden’s unnatural look. He would simply need to “backfill” the large thin and balding area behind his transplanted hairline. It is very important to fill in this area because others can see through the hairline to a vast bald area, making the results look unfinished.

The question now is whether or not Biden’s hair will play a role in the 2008 presidential election. Judging from the reaction of the media, who never fail to mention Biden’s unnatural-looking hair when speaking about him, we could hear a lot more about this as voters make their decisions.

Interestingly, on the other side of the election is John McCain, who sports a thinning comb-over and has been criticized for his age. We know that the one thing that most definitely affects how old one looks is hair. Age-for-age, a person who is balding always looks older than if he had hair. I hear this from my patients every day. The disconnect in people’s minds is that they feel so much younger than they look, and this feels terrible to them.

So who has the upper hand? The man with the unnatural-looking hair transplant or the man with less hair who appears older? Well, history tells us that Americans prefer political figures with hair. Our society views hair loss as a liability, and given a choice, Americans will pick the person with better hair. Will they also pick the person who appears less old? Perhaps the seemingly younger Obama-Biden ticket will have an edge over McCain-Palin. Only time will tell, and it will certainly be fascinating to see how it all pans out.

Enjoy the remainder of the summer! Contact me at any time.