Ross Tucker’s successful football career spanned seven years playing for 5 NFL teams including: the Washington Redskins, Dallas Cowboys, Buffalo Bills, New England Patriots, and Cleveland Browns. Drafted by the Redskins out of Princeton University, this 6-foot 4-inch, 300 pound offensive lineman did not suffer from a lack of self-confidence or self-esteem.

After suffering a playing injury, Ross retired from the NFL and embarked on the next phase of his career as a television sports commentator and motivational speaker. It was then that Ross became aware that he was suffering from hair loss. “You see yourself in the mirror every day and you really don’t notice when your hair starts to thin,” said Tucker. “But, when I started looking at videos of me on TV, all the different angles really showed my hair loss and it hit me – I needed to do something about it.” 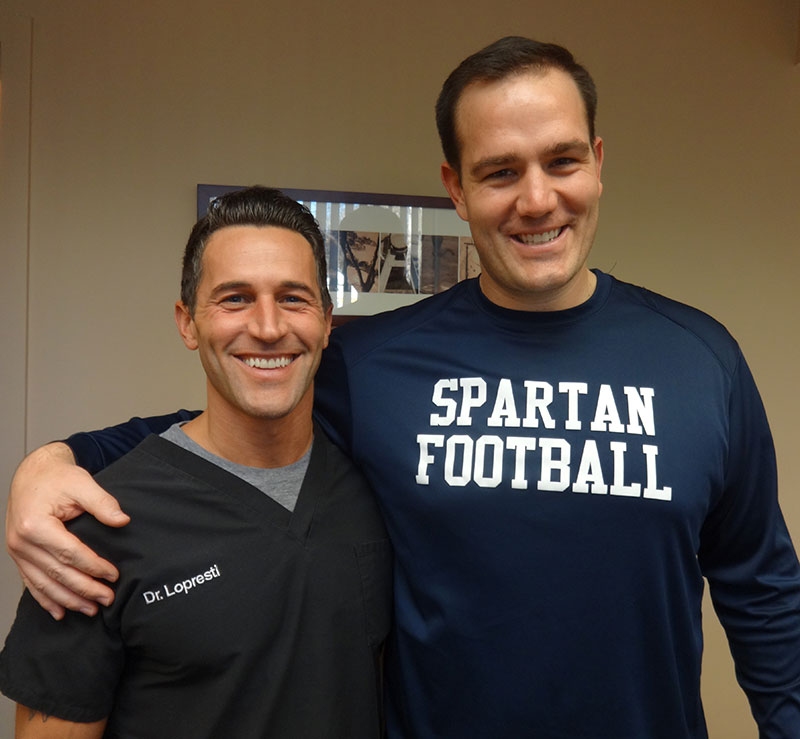 While his hair loss did not affect Ross’ overall confidence, he felt that looking his best was important in his new career path. “In this industry, appearance matters and if I lose a job or opportunity because I’m not good enough – I understand that, but I’m not going to lose out because I didn’t look as good as possible.”

Ross did not immediately seek out Dr. Leonard, instead, he employed the help of on-set makeup artists to try and mask his thinning hairline. “It became a time-intensive process to get ready before going on camera. And, even though the makeup artists did a great job, it never looked one-hundred percent natural.”

Ross then went on a hunt to find the best doctor in the business and had a conversation with fellow sportscaster, Tom Curran of Comcast SportsNet New England, who is a Leonard Hair Transplant Associates patient. “I spoke to Tom who connected me with Dr. Leonard. I was able to talk to some of his patients including Wes Welker and Chris Gronkowski. They had tremendous success with their hair transplant surgery, so I knew I would be in good hands.”

Ross had an ARTAS® Robotic System hair transplant on June 28, 2015 in Dr. Leonard’s Newton, Massachusetts office. He said the procedure was not painful at all and that he was back to working out and resuming all of his normal activities within days of the procedure.

“We are thrilled that Ross chose us to restore his thinning hair.” said Dr. Leonard. “We always strive to provide the best solutions and options for our patients.” ARTAS® offered Ross a state of the art technique with extreme precision, unprecedented levels of safety, efficacy and comfort during the procedure and without linear donor area scarring.

Hair loss impacts 50 million men in the United States. If you or someone you know is faced with hair loss issues like Ross, contact our team to schedule a free, confidential consultation. There are so many options out there and the results can really change your life!